"I have no aukat, let's discuss Gujarat's ..." PM Modi dares Congress to a face-off 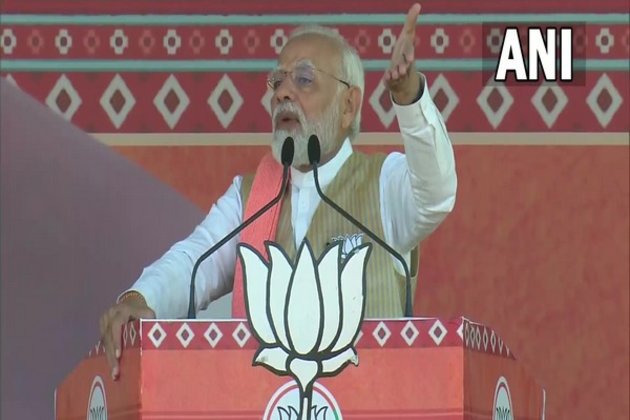 Surendranagar (Gujarat) [India], November 21 (ANI): As the campaigning in Gujarat gains momentum, Prime Minister Narendra Modi challenged Congress to "a face-off" on the issue of development rather than discussing "aukat".

"They talked about showing me my 'aukat'...called me many names...I have no 'aukat'," PM Modi said referring to the Congress leaders' criticism of him.

Apparently targeting Congress leaders, he said, "You belong to the royal family, I hail from an ordinary family, I have no problem. I am a servant and a servant with little to do. You called me ugly, low caste, death dealer, dirty sewer worm and now you ask to show aukat.""I have no aukat. Let's discuss the issue of development and make Gujarat develop. Come to the field. Let this be a face off," Prime Minister Narendra Modi said in a scathing attack on the Congress during a public address in the Dudhrej area of Gujarat's Surendranagar.

In a veiled attack on Rahul Gandhi for walking with Medha Patkar, PM Modi said that their leader travels by putting his hands on the shoulders of the people who made Gujarat "thirsty".

PM Modi during his rally in Dhoraji on Sunday as well in an apparent swipe at Rahul Gandhi said that during the Bharat Jodo Yatra, the Congress leader walked with a woman who tried everything to derail the Narmada Project.

"You should ask them with what face are they coming to seek votes from you. They did everything to stall the Narmada project for decades together and ensured that no money including that from World Bank was able to come over to Gujarat. They were constantly maligning the reputation of Gujarat," PM Modi said on Sunday as on November 19, Rahul Gandhi was joined by activist Medha Patkar, in his Bharat Jodo Yatra, who spearheaded the Narmada Bachao Aandolan to prevent the displacement of locals due to the water of the Dam.

Attacking the 'padyatris' of Bharat Jodo Yatra, PM Modi said, "People doing padayatra don't even know how cotton and groundnut are grown.""80 per cent of the country's salt is made in Gujarat. When we came, we changed the status of Agarias (salt farmers of Kutch). We have encouraged small businesses.

"Surendranagar has seen the rule of Tendermafia. I have said earlier also that if any district would ever avail maximum benefits from Narmada scheme, it will be Surendranagar," PM Modi emphasised today.

He said that he was successful in providing 24 hours electricity supply to the people of the state when he was the chief minister.

"When I was the Chief Minister, I decided to provide 24 hours electricity to Gujarat-which was termed 'impossible' by the Congress leaders. But the people made me do difficult work and that's why I could deliver 24-hour electricity to the villages in Gujarat in the last 10 years," the Prime Minister said.

In his address, PM Modi also talked about the farmers and highlighted the government's introduction of nano fertiliser for the farmers.

PM Modi also said that the Centre gets urea for the farmers at the rate of Rs 2,000 but sells it to them for Rs 270. The coming days of Surendranagar will be golden, he added.

The state of Gujarat which has 182 assembly constituencies is slated to go for polling in two phases on December 1 and 5. The counting of votes will occur on December 8, which coincides with Himachal Pradesh's result date.

Gujarat where the ruling party BJP has been in power for over 27 years will be seeking its seventh term in office.

Prime Minister Narendra Modi has been Gujarat's longest-serving chief minister from 2001 till 2014.

The state has been a BJP stronghold for a long period and the party has set its sight on returning to power with a handsome majority this time as well.

However, it faces a stiff electoral challenge from the Arvind Kejriwal-led Aam Aadmi Party (AAP), which has named Isudan Gadhvi as its chief ministerial candidate.

Congress is also hoping to put its best electoral foot forward to unseat the BJP government.

After carpet bombing by the BJP last week across 83 seats in poll-bound Gujarat, the party will hold Sabhas tomorrow across 93 assembly constituencies that go into polls in the second phase of the state elections.

This massive show of strength by the BJP will include rallies anywhere between a crowd of 3,000 to 5,000 up to 20,000 at various locations.